In the last few weeks we’ve seen a lot of attention in the media about mental health awareness.

The young British Royals championing the Heads Together campaign and a tweet posted by US software developer Madalyn Parke about taking a ‘mental health day’ from work has opened up debate about how we talk about mental health problems.

One in four people will suffer from some form of mental health problems in their lifetime.

Statistically, that means at any one time someone you work with is likely to be suffering, and they’re probably suffering discreetly.

People are often afraid to discuss the subject, especially at work. Taking a day off sick for a dodgy tummy, a bad back or cold is considered the norm, but taking a day off for mental health problems often gets a raised eyebrow.

Madalyn Parke’s tweet was remarkable not just because of her honesty but because of the response of her CEO. Ben Congleton congratulated her on speaking up and for reminding everyone, everywhere to look after their mental health. 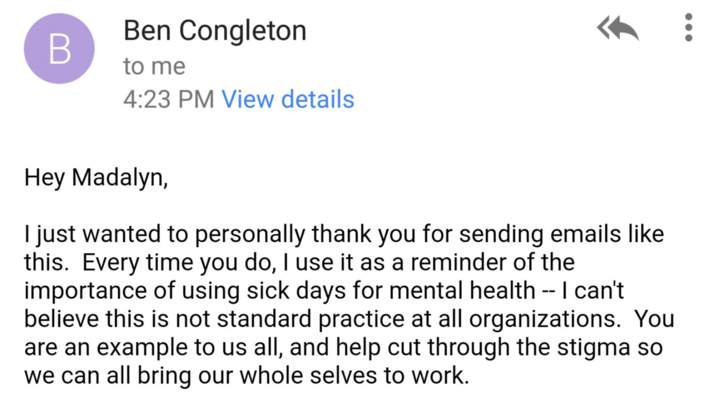 I recently listened to a fantastic talk by Rachel Kelly, who has experienced first-hand the impact of mental health problems and is now a campaigner on the subject. She gives great advice on her website and in her books about strategies on how to cope with mental illness.

At work, we don’t need to be trained counselors to talk to each other. We can start by looking out for each other, checking-in with our colleagues and simply asking How are you today?

Picking up the early signs of mental health problems is something that Rachel Kelly advocates! Talk about how you are feeling early on, rather than allowing an issue to become something so much worse. Everything you feel is normal, and with more people talking about it, the stigma attached to it will become a thing of the past.

We need not fear mental illness. Check-in with your desk mate. It could make a big difference to their day!

By this time you should have a clear revenue objective that’s been widely communicated.  Existing silos between marketing, sales and customer teams should be in the process of

12 Considerations For Choosing A B2B Digital Agency in 2020

Editor’s Note: Post updated March 1, 2020* With so many choices in the market and your business success weighing on your shoulders, how do you select a B2B

What to consider when launching digital solutions

In a constant effort to establish portfolio diversification, especially in the omnipresent IOT world, many hardware companies are now offering software and solutions that are compatible with their

Back from Texas and caught up from an educational week at this year’s Sirius Decisions Summit. We had loads of great conversations, met some fantastic people, and were